How do interactions between plants and viruses influence symptom severity?

Plant viruses can cause significant economic losses in cultivated plants by inducing visual symptoms that affect plant productivity.  However, there are also many viruses that co-exist with their hosts without inducing significant symptoms.  Symptom severity is determined not only by the ability of viruses to multiply and to disrupt the physiology of the plant but also by plant defense responses that attempt, sometimes unsuccessfully, to control virus infection.

Our lab, which is located at the Pacific Agri-Food Research Centre in Summerland, BC, and is associated with the Department of Botany at UBC, has been interested in studying how plants and viruses interact and how these interactions influence symptom severity.  In particular, we have been studying the molecular mechanisms regulating symptom recovery in Nicotiana benthamiana plants infected with tomato ringspot virus (ToRSV).  ToRSV causes economic losses in fruit trees (apple, peach etc…), grapevine and small fruits (raspberry, blueberry etc…) in North America and also infects a wide variety of non-cultivated herbaceous plants such as N. benthamiana.   After inoculation with ToRSV, N. benthamiana plants develop necrotic symptoms on the inoculated leaves and on leaves immediately above the inoculated leaves.  However, later in infection, plants recover from infection and new leaves emerge that are asymptomatic (often referred to as recovered leaves) (Fig. 1). 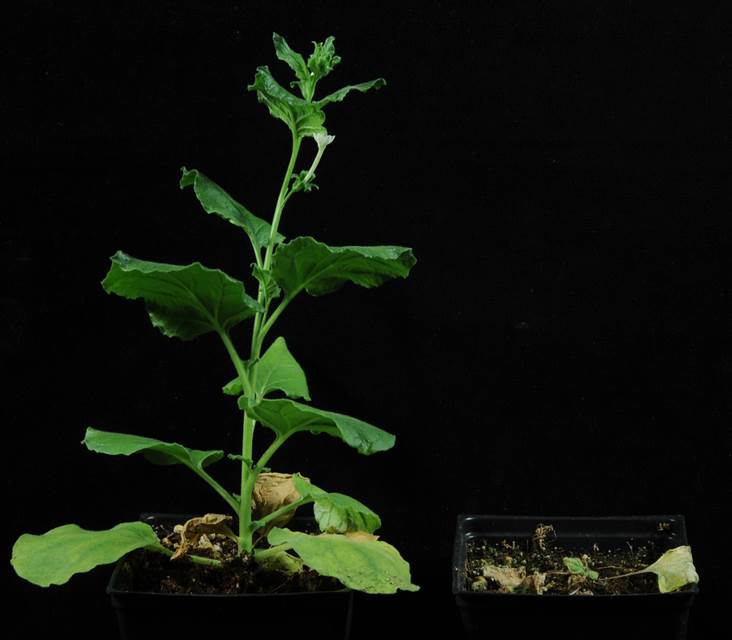 In initial studies, we found that the recovered leaves contain viral nucleic acids (RNA in the case of ToRSV) in concentrations similar to those found in symptomatic leaves (1).  This left us puzzled:  if the virus is still there, why is it no longer inducing symptoms?  Basudev (Basu) Ghoshal (UBC Botany Ph.D. student) started in the lab in May 2009, and was determined to get answers.   He first showed that symptom recovery is temperature-dependent and occurs at 27oC but not at 21oC (Fig. 2).   Although viral RNAs are present in similar levels in symptomatic or recovered leaves, the concentration of viral proteins is much decreased in recovered leaves compared to symptomatic leaves.   Further analysis revealed that this is due to a severely reduced rate of translation of the viral RNAs just prior to the onset of symptom recovery (2).   This repression of viral RNA translation is not observed in plants grown at 21oC, and as a consequence, viral proteins accumulate to high levels and the plants continue to develop severe symptoms.  These results indicate that accumulation of viral proteins, controlled by the rate of translation of viral RNAs, regulates symptom severity.

RNA silencing is a well-characterized plant antiviral response that generally acts by degrading viral RNAs in a sequence-specific manner.  RNA silencing is also known to be more active in plants grown at higher temperature.  Although RNA silencing has been implicated in other symptom recovery phenotypes, we knew that if it was involved in ToRSV-infected plants, it likely used a mechanism distinct from RNA degradation, since viral RNAs were still present in high concentration in recovered leaves.  Basu decided to test the effect of down-regulating the expression of ARGONAUTE (AGO) proteins, which are key enzymes of plant RNA silencing pathways.  We were very excited when he discovered that plants deficient in AGO1, one of the 10 plant AGO proteins, did not recover from infection (Fig. 3).  In addition, these plants are unable to repress the translation of viral RNAs.  Thus, viral proteins accumulate to a high level (2).  These results provided strong evidence that translation repression can function as a novel plant antiviral mechanism and that AGO1 is involved directly or indirectly in this mechanism. 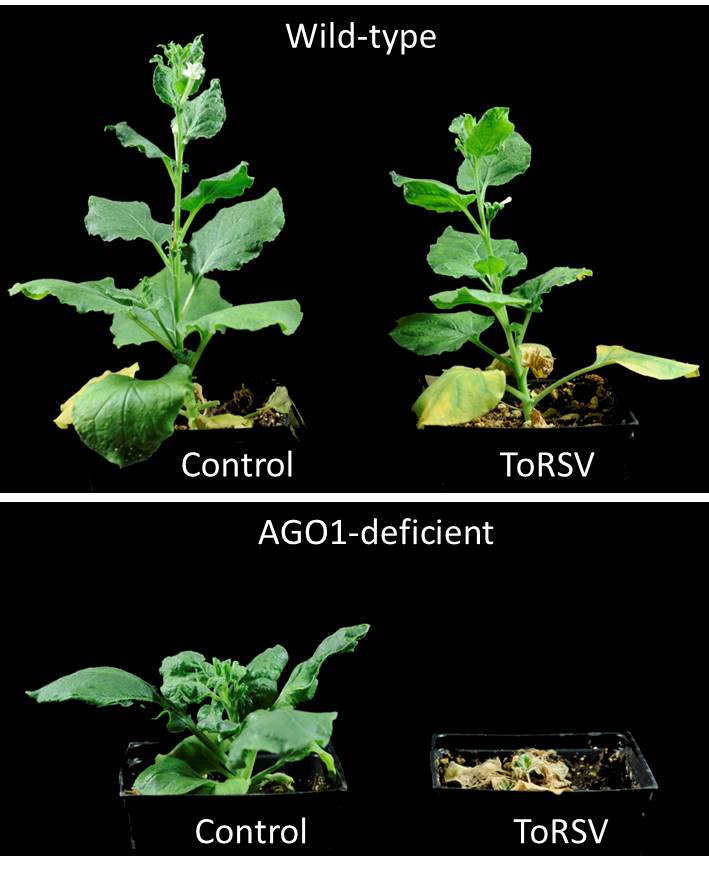 Basu defended his thesis in July 2014 and the introduction chapter of his thesis was adapted to be published as an authoritative review on the various RNA silencing mechanisms associated with symptom recovery in virus-infected plants (3).  This review, now in press, will be published in conjunction with the 60th anniversary issue of the journal “Virology” and includes a model for the newly-discovered translation repression mechanism.  We are hoping that the new insights in the molecular mechanisms regulating symptom recovery will lead to improved plant disease management strategies applicable to cultivated plants in the field.

Figure 1: Symptom recovery in N. benthamiana plants infected with ToRSV.  Inoculated leaves develop symptoms in the form of necrotic rings by five days post-inoculation (5 dpi, left).  At 8 dpi, leaves immediately above the inoculated leaves display necrotic symptoms along the veins (centre).  At late stages of infection, the plant apparently recover from infection and new leaves are asymptomatic (right).
Figure 2: Temperature-dependent symptomatology in N. benthamiana plants infected with ToRSV.  Although necrotic symptoms initially develop on ToRSV-infected plants grown at 21 or 27oC, symptom recovery is only observed at the higher temperature.  At 21oC, infected plants become completely necrotic and eventually die (pictures show plants at 20 dpi).
Figure 3: Symptom recovery depends on AGO1.  Although wild-type plants recover from infection by 16 dpi at 27oC (top panel), plants that are deficient in AGO1 do not (lower panel).  The stunting of AGO1-deficient plants compared to wild-type plants is a well-documented side-effect related to the regulation of plant development by AGO1.