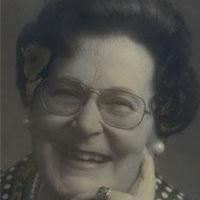 Kay Cole spent her early years as a child in the small community of Wells (near Barkerville), later moving with her family to a home in the upper levels of West Vancouver. I first new Kay as a graduate student in the Department of Biology and Botany at U.B.C. We were both students on honour programmes in the Department - Kay in Biology and I in Botany. Our supervisor was Andrew Hutchinson, Head of the Department. As Honours students we were provided with office/study space in the then Applied Science Building on the West Mall. We had adjoining desks. At that time, to get to U.B.C. from West Vancouver, she would take a bus from the upper levels to the waterfront at Ambleside where she would take a ferry under the Lions Gate Bridge to the foot of Columbia St. in Vancouver. She would then take a streetcar from Hastings St. to Blanca St. where she would transfer to a bus to the U.B.C. Campus. We both completed B.A. degrees, graduating in 1947 and M.A. degrees in 1948. This was when the Faculty was Arts & Science, before the establishment of the Faculty of Science and the awarding of the B.Sc. and M.Sc. degrees. Kay then left for Smith College, where she completed her Ph.D. in genetics under the supervision of Albert F. Blakeslee. Blakeslee was a world authority on the genetics of Datura and it was on this plant that Kay did her Ph.D. research. I left for the University of California (Berkley) where I completed the Ph.D. in marine phycology under the supervion of G.F. Papenfuss.

During her years at U.B.C., Kay was active in the Music Society. She had a fine contralto singing voice and frequently performed in concerts and in Vancouver on radio during her years as a student at U.B.C.

In the early years of our appointments at U.B.C. she continued her research in genetics, however on Medicago(alfalfa) . For several years in the summers in the 1950's I taught a course in marine phycology at the Friday Harbor Marine Laboratory of the University of Washington. Kay was looking for a area of genetics that was new and challenging instead of the vascular plants she had been working with. I suggested to her that the genetics/cytology on marine algae was a new and challenging area she might like to explore. She spent one summer at Friday Harbor in the late 1950's experimenting with her cytological techniques on marine algae. From then on, she and her graduate students pursued their research on the cytology (eventually the ultrastructure) of marine algae. She soon became a world-renewed researcher in the field of the cytology of marine algae. (I can see her yet at Friday Harbor, where her thumbs were usually stained purple from doing the fuchsin squash technique!).