Where It's Easy Being Green

This article is originally from the Hakai Institute—a set of interlocking programs that blend technology and science to better understand the coastal margin of British Columbia and beyond. Read more stories like this at hakai.org/blogs

If you’re an alga, the Calvert Island coastline has it all—sheltered bays, wave-battered rocks, shallow lagoons, and powerful ocean currents. No matter your lifestyle, there’s a nook or cranny available. It’s why algal experts Sandra Lindstrom, Patrick Martone, and their team kept coming back for a decade—every year brought new surprises.

In 2011, the scientists began their inventorial journey to write “The Marine Flora of Calvert Island”—a monumental tome of all three major algae groups: green, red, and brown. With an all-star lineup of experts, the grand algal opus seemed possible—until they ran into a good problem. There are a heck of a lot of seaweed species on Calvert Island. So where does a seaweed scientist even begin?

“The green [algae] seemed like the most manageable,” says Martone, a professor at the University of British Columbia (UBC). “Which is funny because I find greens to be a really tricky group.”

To confidently identify a seaweed species requires a back-and-forth of expertise and technology with some artistry in between. Step one is to collect seaweed samples and press them onto special paper in much the same way that you’d press flowers for preservation. Green algae come in a plethora of shapes and forms. Paper-thin blades. Nondescript rock fuzz. Interlocking strands of an intricate feather boa. A weirdo called dead man’s fingers, Codium fragile, whose dozens of branches are made up of only one cell (example in header photo).

With each pressing, an expert ascribes a species name as best as possible, while a small clipping is brought back to the lab for DNA barcoding. It’s in the DNA that hidden species are revealed. Take a single-celled wonder called Derbesia, aptly called green sea grapes after their spherical reproductive form.

“There was only supposed to be one species of Derbesia in the area,” says Lindstrom, an adjunct professor at UBC and a renowned algal expert. “We never saw that one. Instead we found three species and don’t have a name for any of them.” 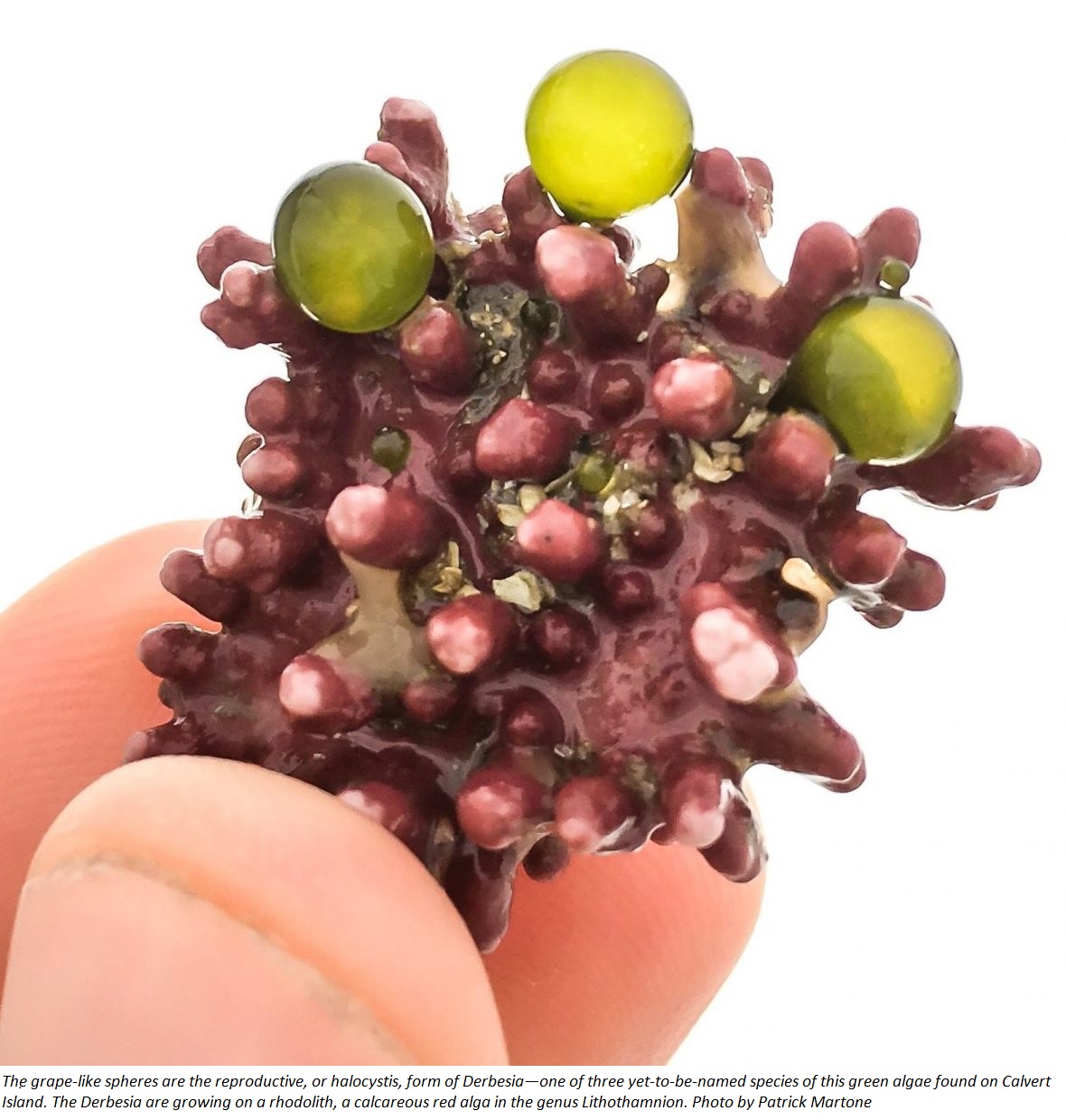 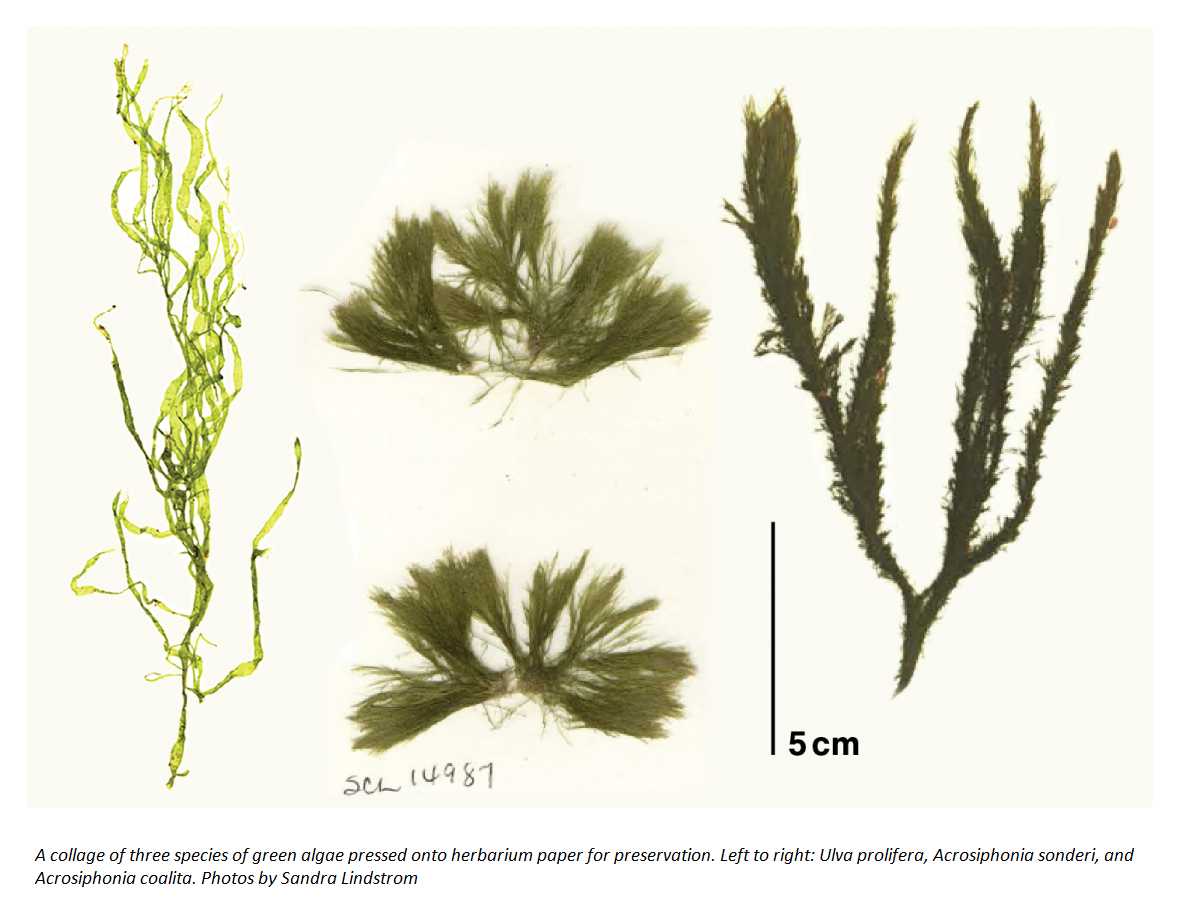 Another diversity surprise came from plumes of elongated filaments within the genus Acrosiphonia. These unassuming green seaweeds are informally called Grinch fingers by Martone because they resemble the wispy digits of Dr. Seuss’ eponymous cantankerous character. Based on how they look in the field, Martone generally only applies one or two scientific names. But DNA barcoding revealed what even a trained eye can’t see at first glance—so scientists return to the pressings for closer inspection.

“These cryptic species get totally overlooked,” says Martone. “Once we sequence the DNA then we look back at the pressed specimens again to see if there are any morphological differences or habitat details we can use to tell them apart.”

Once DNA bins the collection into species, similarities and differences may more easily come into focus. Maybe species A is more cylindrical. Or species B only grows near seagrass meadows. These yet-unnamed cryptic seaweeds cause the area’s species list to swell.

On Calvert Island, the diversity is, in part, tied to the powerful ocean currents coming from the north, south, and west. Some new seaweed finds are typically southern species extending their range north, while others are colder water species previously only found in Alaska. And then there’s the species of green that came from even farther afield—over 7,000 kilometers across the Pacific. Resembling a clump of moss-colored dog hair, Cladophora opaca is a Japanese seaweed that showed up on Calvert Island in 2017. 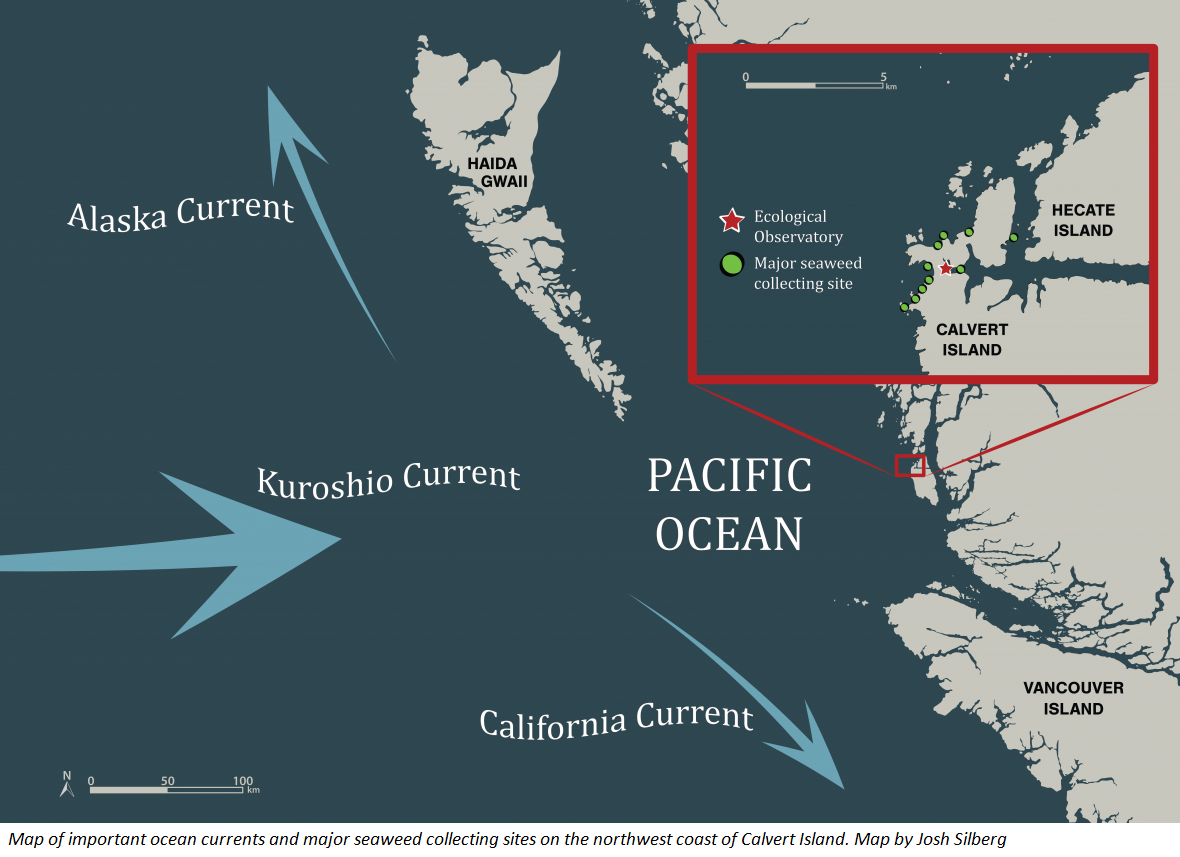 “It was totally out of the blue. This seaweed has never been reported from North America before,” says Lindstrom, who adds that there’s no evidence that its presence was tied to debris associated with the 2011 Tōhoku tsunami. Instead, it may have come over attached to a ship’s hull, rafting on a log, or as a tag along with oyster spat.

And after a decade, when do the scientists think they’ll stop finding new species to add to the list?

“People ask me every year,” says Martone. “I’ll say I think we’ve captured all the diversity and then we find something new.”

With a manuscript describing the green algae of Calvert Island out in the journal Botanica Marina this week, the scientists can shift their colour focus elsewhere. In addition to the 42 species of green algae, more than 300 species of red and brown algae have already been found by their team on Calvert Island, so their work is far from over.

“We picked off the easy one,” says a grinning Martone. The inevitability of seaweed surprises is great motivation.