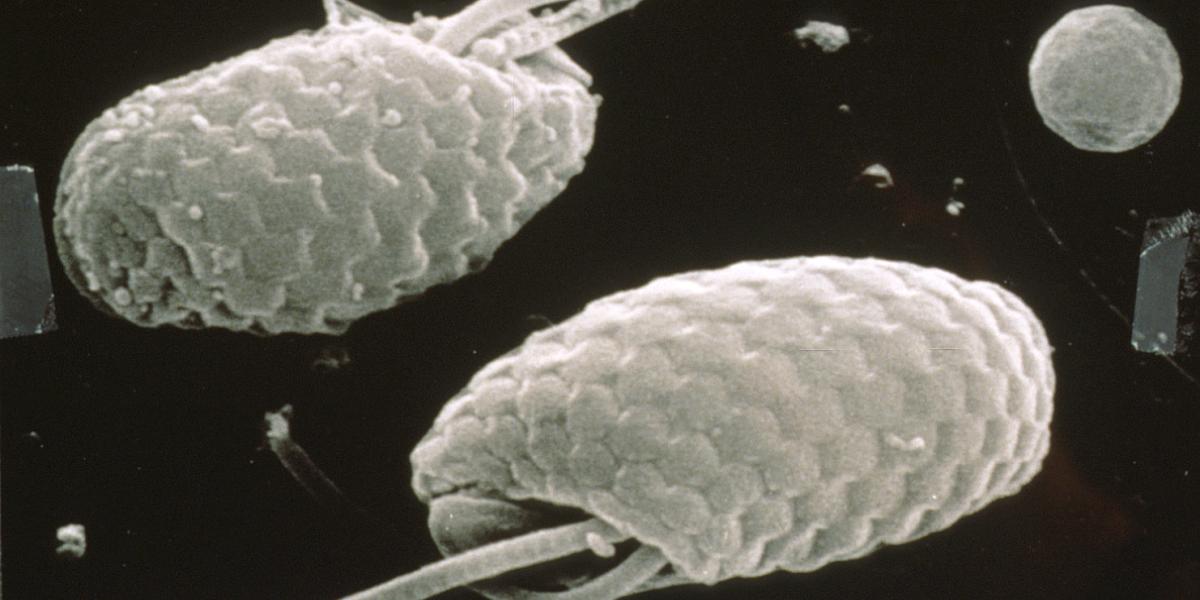 New research in Nature Communications details the painstaking unraveling and reconstruction of a key protein in a single-celled, photosynthetic organism called a cryptophyte, a type of algae that evolved over a billion years ago.

Up until now, how cryptophytes acquired the proteins used to capture and funnel sunlight to be used by the cell had molecular biologists scratching their heads. They already knew that the protein was part of a sort of antenna that the organism used to convert sunlight into energy. They also knew that the cryptophyte had inherited some antenna components from its photosynthetic ancestors—red algae, and before that cyanobacteria, one of the earliest lifeforms on earth that are responsible for stromatolites.

But how the protein structures fit together in the cryptophyte's own, novel antenna structure remained a mystery—until Dr. Paul Curmi, a structural biologist at University of New South Wales, PhD student Harry Rathbone, University of British Columbia biologist Dr. Beverley Green and colleagues from University of Queensland pored over the electron microscope images of the antenna protein from a progenitor red algal organism made public by Chinese researchers in March 2020.

Unraveling the mystery meant the team could finally tell the story of how this protein had enabled these ancient single-celled organisms to thrive in the most inhospitable conditions—meters under water with very little direct sunlight to convert into energy.

"We provide a direct link between two very different antenna systems and open the door for discovering exactly how one system evolved into a different system—where both appear to be very efficient in capturing light," says Dr. Curmi. "Photosynthetic algae have many different antenna systems which have the property of being able to capture every available light photon and transferring it to a photosystem protein that converts the light energy to chemical energy."

By working to understand the algal systems, the scientists hope to uncover the fundamental physical principles that underlie the exquisite photon efficiency of these photosynthetic systems.

Dr. Green, Professor Emerita with UBC’s Department of Botany, says Dr. Curmi was able to make the discovery by approaching the problem from a different angle.

"Paul's novel approach was to search for ancestral proteins on the basis of shape rather than similarity in amino acid sequence," she says. "By searching the 3D structures of two red algal multi-protein complexes for segments of protein that folded in the same way as the cryptophyte protein, he was able to find the missing puzzle piece."

When a single-celled organism swallows another, it can enter a relationship of endosymbiosis, where one organism lives inside the other and the two become inseparable.

"Often with algae, they'll go and find some lunch—another alga—and they'll decide not to digest it. They'll keep it to do its bidding, essentially," Rathbone says. "And those new organisms can be swallowed by other organisms in the same way, sort of like a matryoshka doll."

In fact, this is likely what happened when about one and a half billion years ago, a cyanobacterium was swallowed by another single-celled organism. The cyanobacteria already had a sophisticated antenna of proteins that trapped every photon of light. But instead of digesting the cyanobacterium, the host organism effectively stripped it for parts—retaining the antenna protein structure that the red algae—used for energy.

And when another organism swallowed a red alga to become the first cryptophyte, it was a similar story. Except this time the antenna was brought to the other side of the membrane of the host organism and completely remolded into new protein shapes that were equally as efficient at trapping sunlight photons.

As Dr. Curmi explains, these were the first tiny steps towards the evolution of modern plants and other photosynthetic organisms such as seaweeds.

"In going from cyanobacteria that are photosynthetic, to everything else on the planet that is photosynthetic, some ancient ancestor gobbled up a cyanobacteria which then became the cell's chloroplast that converts sunlight into chemical energy. And the deal between the organisms is sort of like, I'll keep you safe as long as you do photosynthesis and give me energy."